Nomura research has summarized evidence of oversupply of residential property in China. Urban floor space per capita is now estimated to be higher than in some developed countries. Land conversion is still rising, while urbanization is slowing. Potential triggers for a sharp correction include interest rate liberalization, capital outflows and property taxes. A plunge in property activity would have serious economic and financial consequences.

The below are excerpts from the reports. For access please contact your local Nomura representative. Cursive lines and emphasis have been added.


The evidence of oversupply

“In 2000, there was only 497 million square meters of newly completed urban residential floor space, but by 2013, this number rose to 2596 million square meters, an astonishing 423% increase. This implies average growth of 13.6% per year during this period, compared with average urban population growth of 3.7%.”

“We estimate residential floor space per registered urban resident may have reached 37 square meters by 2013, compared to 35 in Japan and 33 in UK. If the current trend holds, it will reach 51 square meters by 2017. Official data show inventory has risen by 182% from 2009 to 2013, yet land sales suggest that supply is set to rise quickly in coming years…In 2011 there were only two cities that were widely reported as ghost towns, but there are now more than 10 cities facing this type of problem.” 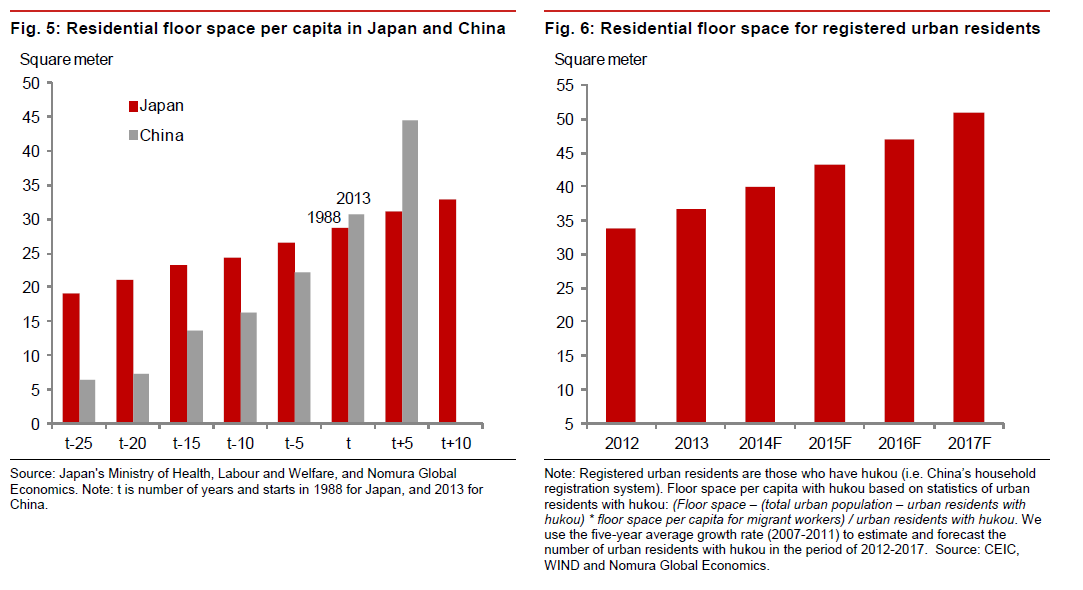 “Land sales soared by 52.4% in 2013 in value terms… We estimate that, in volume terms, land sales rose by 7.0% in first-tier cities, 3.7% in second-tier cities, and 23.2% in third- and fourth-tier cities in 2013 . They rose by 159.3%, 34.2% and 57.0%, respectively, in value terms. These increases partly reflect incentives from local governments aimed at boosting land sales to help ease financing pressures faced by local financing vehicles…This raises the supply of properties in the pipeline and exacerbates the demand-supply imbalance even further.”

“The demographic trend became unfavourable for housing demand in 2012, when the working-age population dropped by 3.45m, its first decline since 1996. The…working age population dropped again by 2.27m in 2013. We believe this is a result of the one-child policy and expect this trend to continue in coming years.”

“If urbanisation continues at a rapid pace, properties that are vacant today may be filled by immigrants from rural areas. Indeed China’s urbanization ratio is still low at 53.7% in 2013 compared to over 80% in some developed economies… However… the size of the urban population grew by only 2.7% in 2013, its slowest rate of growth since 1996 and much lower than the average annual growth rate of 4% from 2000 to 2010. .. We believe urbanisation will continue to slow in coming years, as industrialisation slows, surplus rural labour is depleted, and local government attempts to expand urban areas are constrained.”

“Several macro factors could trigger a correction in the property market, including a rise in interest rates, an opening up of capital account, the introduction of a property tax, and the anti-corruption movement…

Why a property market correction is a systemic risk

“[Property investment] has become a pillar of growth for China, making up 16% of GDP, 33% of fixed asset investment, 20% of outstanding loans, 26% of new loans, and 39% of government revenues in 2013. If it slows sharply, we see no obvious replacement to support growth.”