The April 2013 IMF Global Financial Stability Report takes stock of the market impact of non-conventional central bank policies. In particular, the latter have replaced traditional interbank and money market activity, turned the Fed into a dominant player in the U.S. MBS market, and made all G4 centrals banks (and particularly the Bank of England) a major holder of local government debt. The politically mandated biases in market prices could unwind disorderly if and when economic development mandates a reversal of non-conventional policies.

IMF Global Financial Stability Report, April 2013, Chapter 3, Do Central Bank Policies Since the Crisis Carry Risks to Financial Stability?
http://www.imf.org/external/pubs/ft/gfsr/2013/01/pdf/c3.pdf
A useful overview of all individual non-conventional monetary policy actions since in the G4 is provided in Annex 3.1 of the above IMF report. The IMF classifies non-conventional monetary policy into four groups:
·         Prolonged periods of very low interest rates, sometimes combined with forward guidance on the length of time for which rates are expected to remain low;
·         Quantitative easing (QE), which involves direct purchases in government bond markets to reduce yield levels or term spreads when the policy rate is at or close to the lower bound;
·         Indirect credit easing (ICE), in which central banks provide long-term liquidity to banks (sometimes with a relaxation in access conditions), with the objective of promoting bank lending; and
·         Direct credit easing (DCE), when central banks directly intervene in credit markets—such as through purchases of corporate bonds or mortgage- backed securities—to lower interest rates and ease financing conditions (and possibly mitigate dysfunction) in these markets.
“These operations have led to a fundamental change in the size and composition of central bank balance sheets (see table below). Total assets have increased significantly, mostly in the form of government securities, bank loans, equities, and mortgage-backed securities… Risks on balance sheets of central banks have increased since the start of the crisis, with potential negative consequences for their financial strength and independence.” 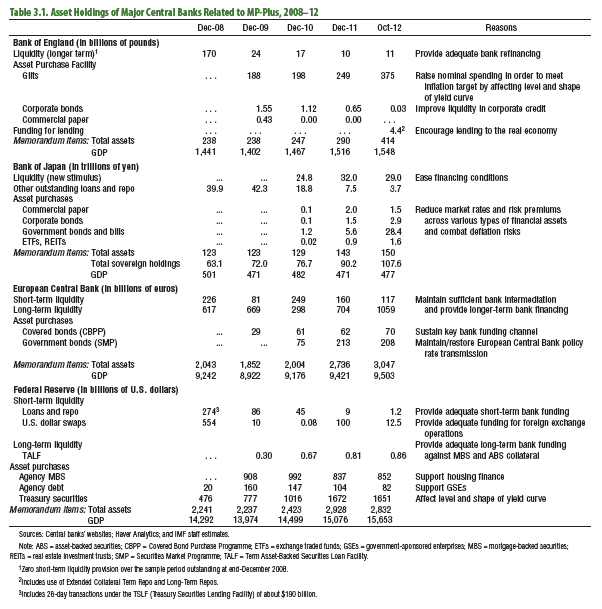 Consequences for money and interbank markets
“The prolonged period of low interest rates increases risks in money markets, including through developments in money market mutual funds (MMMFs). With interest rates remaining near zero in the maturities at which MMMFs are permitted to invest, these institutions are experiencing very low (in some cases zero or negative) returns that in many cases fail to cover the costs of fund management. As a consequence, U.S. MMMFs have raised credit risk modestly,…engaged in more overnight securities lending, granted fee waivers, and turned away new money…”
“Another run on MMMFs may occur if downside credit risks materialize or securities lending suddenly halts, fuelling investors’ fear of MMMFs “breaking the buck” (that is, failing to maintain the expected stable net asset value). Once started, a run may accelerate because investor guarantees that were established in the wake of the Lehman Brothers bankruptcy have been removed, and the Dodd-Frank Act precludes the Federal Reserve from unilaterally stepping in to provide liquidity to the sector.”
“From a money-market perspective, risks stem…from a misstep in the eventual withdrawal from the market. If central banks exit from interbank markets before…the private bank funding market is fully restored, renewed strains could resurface, with the costs of short-term bank financing turning significantly higher for some banks.”
Mortgage and Corporate Securities Markets
“During 2009 and the first half of 2010, the Federal Reserve purchased close to USD1 trn in mortgage-backed securities (MBS) to support the U.S. housing market…It made a new commitment to buy MBS in September 2012 in an effort to lower mortgage interest rates further and spur credit extension….The purchases of the Federal Reserve have made it a major market player, holding 20% of outstanding MBS….it does raise policy risk surrounding a future exit…the large current role of central banks may mask underlying vulnerabilities in the private market that may be difficult to assess.”
Government Bond Markets
“The Federal Reserve and the BOJ now each hold some 10% of their respective governments’ debt, the BOE holds 25%, and the ECB holds an estimated 5-6% of the outstanding sovereign debt of Italy and Spain…The increasing share of government bonds held by central banks may present risks to financial stability… Once economic conditions warrant the withdrawal of monetary stimulus, markets may anticipate that central banks will switch from buying government bonds to actively selling them, and political pressure may be exerted to move the monetary authorities in that direction. Such expectations could sharply drive up yields.”
Some IMF conclusions
“The analysis finds little evidence that [non-conventional monetary policy] has given rise to a serious immediate degradation of financial stability (Table 3.5). Overall, the effects…Over the medium term, however, [it] may be generating risks that have not yet become evident in banks…