Two recent papers help understanding the information value of the implied volatility index for the S&P 500 stock index (VIX). An ECB paper de-composes VIX into measures of equity market uncertainty and risk aversion, e.g. the quantity and price of risk. Risk aversion in particular has been both a driver of monetary policy and an object of its effect. Meanwhile, a Fed paper emphasizes that the implied volatility of VIX (“vol of vol”) is a useful measure of tail risk prices and a predictor of tail risk hedges’ returns.

ECB Working Paper 1565, July 2013
http://www.ecb.europa.eu/pub/pdf/scpwps/ecbwp1565.pdf
“Volatility of Volatility and Tail Risk Premiums”, Yang-Ho Park
Federal Reserve, Finance and Economics Discussion Series, 2013-1085
http://www.federalreserve.gov/pubs/feds/2013/201354/201354pap.pdf
The below are excerpts from the papers. Cursive text and emphasis has been added.

Decomposing VIX in quantity and price of risk

“The VIX can be split into a measure of stock market or economic uncertainty, and a residual that should be more closely associated with risk aversion…An estimate of the expected future realized variance…is customarily obtained by projecting future realized monthly variances (computed using squared 5-minute returns) onto a set of current instruments. We follow this approach using…a two-variable model where the squared VIX and the past realized variance are used as predictors…The fitted value from the two-variable projection is the estimated conditional variance and our measure of “uncertainty.” The difference between the squared VIX and the conditional [model-predicted] variance is our measure of “risk aversion.” [The latter is also] called the variance premium… The variance premium is nearly always positive and displays substantial time-variation.” 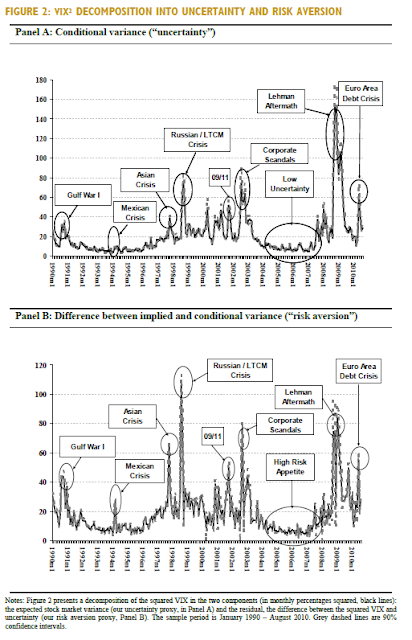 “To measure the monetary policy stance, we use the real interest rate, i.e., the Fed funds end-of-the-month target rate minus the CPI annual inflation rate…[Empirically] lax monetary policy decreases risk aversion in the stock market after about nine months. This effect is persistent, lasting for more than two years. Moreover, monetary policy shocks account for a significant proportion of the variance of the risk aversion proxy… The effects of monetary policy on uncertainty are similar but somewhat weaker.”

“Periods of both high uncertainty and high risk aversion are followed by a looser monetary policy stance but these results are less robust and weaker statistically. ”

“It is the uncertainty component of the VIX that has the statistically stronger effect on the business cycle, not the risk aversion component… Industrial production is used as our benchmark indicator of business cycle variation at the monthly frequency.”

“Because monetary policy significantly affects risk aversion and uncertainty and these financial variables may affect the business cycle, we seem to have uncovered a monetary policy transmission mechanism missing in existent macroeconomic models.”

VIX as a measure of tail risk

“As a new measure of tail risk, we suggest using a model-free, risk-neutral measure of the volatility of volatility implied by a cross section of the VIX options, which we call the VVIX index…The market’s perception of tail risk can affect stock index dynamics through two stochastic channels:

“Whereas most of the existing papers identify tail risk through the lens of a jump process this paper takes the distinct perspective that tail risk information can be impounded into the volatility of stochastic volatility as even a small change in that variable can have a critical influence on left tails of return distributions.”