In a new BIS paper K. Miyajima provides evidence that unsterilized FX interventions in emerging market economies fail to influence exchange rate forecasts (as published by Consensus Economics) in the direction of the intervention. This supports the intuition of market practitioners that interventions may briefly stem or reverse the market tide, but do not typically have the purpose or power to change the prevailing fundamental trend. 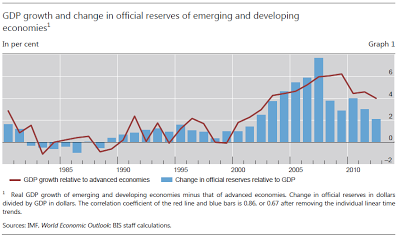 “We focus on a few EMEs with floating exchange rates that typically conduct discretionary intervention [and] that are perceived to have different degrees of capital openness—Brazil, Peru, Korea and Malaysia…Guided partly by data availability, we focus on the period spanning June 2004– August 2012 (for Malaysia mid-2005 onwards to focus on the period of a flexible exchange rate regime). To prevent exceptionally disorderly market conditions around Lehman’s bankruptcy from affecting the results, we exclude the observations during July 2008–March 2009 from the estimation.”

“Graphs 3 shows monthly net intervention as a percentage of official reserves on the x-axes and the monthly change in three month exchange rate forecast on the y-axes. Intervention data are lagged by one month. The blue and red dots are for the first sub-period (June 2004–June 2008) and the second (April 2009–August 2012), respectively. The correlations suggest that dollar purchases in the previous month are often related with an adjustment of three month exchange rate forecasts in the direction of appreciation, rather than depreciation, and vice versa.” 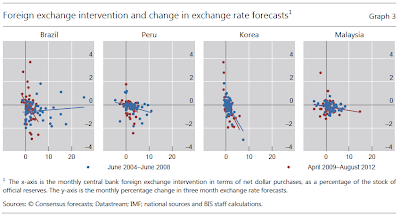 “[Further econometric results] highlighted that central bank foreign exchange intervention does not seem to systematically influence near-term exchange rate expectations in the direction desired by the central bank. In other words, central bank dollar purchases to fight currency appreciation or related currency volatility are not associated with an adjustment of near-term exchange rate forecasts in the direction of depreciation, and vice versa. This finding was robust to different specifications including interest rate expectations, international country risk premia, international energy prices, foreign capital inflows, growth expectations and US data surprises.”