A DB paper suggests that the rising median age of the world’s population will increase savings ratios. The trend is reinforced by macro policies aimed at generating external surpluses or at least restraining deficits. The onus of absorbing the resulting savings glut may fall on the United States, which issues the world’s anchor currency. Irrespective of whether it accepts that role, cost of capital for the world as a whole is likely to be compressed by the savings glut.

The below are excerpts from the report. For the original report please contact Deutsche Bank

An aging population heralds an increasing proclivity to save

“[Current] population trends imply that we are entering a phase where rapid aging will cause many countries to generate persistent current account surpluses.”

“When people are young, they have little savings and may even need to borrow in order to spend on consumption and/or build assets. However, as they grow older, their net savings rise as they build up a stock of wealth that is later run down in very old age…there is a systematic pattern where younger countries run current account deficits whereas older countries run the surpluses. Developed countries are generally older than emerging markets but the US and the UK are young by advanced country standards and run deficits. Aging developed countries like Netherlands, Germany and Japan run surpluses. Similarly, China, Russia, South Korea and Taiwan are old by emerging market standards and run surpluses while younger countries like India, Brazil and Turkey run deficits.” 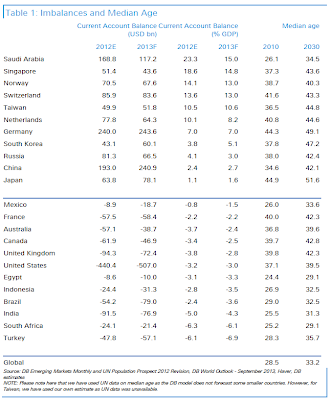 “The link [between age and external balance] is even clearer if one considers the pace of aging by comparing the current median age with the expected median age in 2030. For instance, Japan will then have a median age of 51.6 years while China will go from being significantly younger than the US in 2010 to becoming significantly older after two decades. The aging of South Korea is even faster. It is no coincidence, therefore, that all of today’s current surplus countries (ignoring oil producers like Saudi Arabia) will have a median age above 40 years in 2030.”

Why the world will probably be facing a savings glut

“World demographics are not neatly spaced out such that some countries generate surplus savings exactly when others need to fund deficits. Moreover, there are many factors that may prevent surplus countries from funding deficit countries…This is not just about the well known Feldstien-Horioka problem of home-bias and frictions in capital flows. Even in a world of frictionless capital flows, we know that lenders do not just care about high returns but about policy risk, property rights, corporate governance and the overall ability/willingness to the borrower to return the money. Thus, aging current-account surplus countries may prefer to park their funds in safer countries even though returns are higher in certain emerging markets.”

“We live in a world where everyone wants to run a current account surplus. The US is commended for having “corrected” the imbalances of the pre-crisis era…The crisis countries of Europe are turning the corner as their external accounts have turned positive. Indeed, some economists expect the Eurozone as a whole is likely to register a surplus of USD 300bn this year – exceeding that of China – compared to a deficit of almost USD100bn in 2008. Meanwhile, perennial surplus countries like Japan, China and Saudi Arabia continue to run large surpluses. ”

How will the savings glut be absorbed?

“Inevitably, we feel that the onus of providing the countervailing deficit will eventually fall on the United States. It is still the world’s largest economy despite China’s growth. More importantly…it is the issuer of the world’s anchor currency…One of the common characteristics of most periods of global economic expansion is the willingness of a major economy to trade its credibility to provide the world with a monetary anchor… There is clearly no major concern about the USD as a store of value. Moreover, the world remains willing to finance the US. Despite recent corrections, the US runs a deficit and needs to attract capital and… it is easily able to attract enough capital even with a negative real interest rate.”

“Japan is one possible candidate for a deficit. As the oldest country in the world, it is likely to be the first country to enter the dissaving phase in its demographic lifecycle. This may be helped by the Abenomics of public spending and encouragement for investment (including that for the Olympics). In fact, a weakening exchange rate could well trigger a virtuous cycle of increased investment feeding an external deficit that in turn further weakens…Nevertheless, even if Japan does run deficits in the future, our sense is that Japan is now too small an economy to single-handedly provide the necessary counterweight needed.”

“Meanwhile, demographics will hold down the real cost of international capital whether or not the US decides to absorb part of it… By all indications, the savings glut in the rest of the world will provide it with cheap financing irrespective of Fed tightening. This also fits with the fact that it’s population is young by advanced country standards and is aging slowly.”