A Nomura research report suggests that China’s local government financing vehicles now pose a major risk for the economy. Their debt stock has surged close to 40% of GDP over the past three years. Profitability is poor, liquidity risks are high, and solvency hinges on government support.

What are local government financing vehicles?

How large is LGFV debt?

“Local government financing vehicles have accumulated massive debts since 2009 and now pose a major risk to the economy…We use a unique, bottom-up approach to assess the financial risks of 869 LGFVs, which accounted for 72% of total LGFV debt in 2012″

“We estimate total LGFV debt at the end of 2012 was RMB19.0trn (37% of GDP), which included RMB14.3trn of interest-bearing debt. In the period 2010-12, LGFV debt rose by 39%, which implies total government debt of RMB31.7trn, or 61% of GDP at end-2012…LGFVs played a pivotal role in helping to finance infrastructure investment – one of the pillars of China’s recent economic growth – and official data now show LGFVs account for 14.7% of outstanding bank loans…Our analysis may underestimate the true size and risks in LGFV debt. Our study is based on LGFVs that have issued bonds – and these are likely to be in better financial condition than those that cannot issue bonds.” 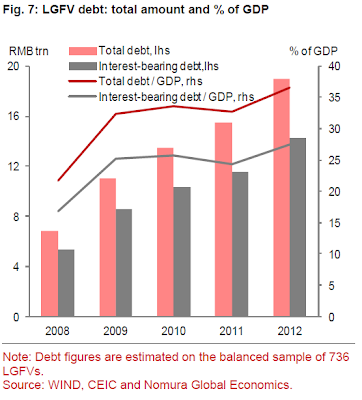 Why is LGFV debt an increasing systemic concern?

“We find LGFVs in our sample face a number of serious financial risks:

“A majority of LGFVs rely on fiscal subsidies and aggressive accounting practices to service their debt. Adjusting for these, we estimate that over half would have been at risk of default in 2012. In a liquidity crisis, we estimate that 70% would have defaulted…Dangerously, LGFVs are relying increasingly on new debt to finance long-term investments.”

“Systemic risks are rising quickly. With government revenues under pressure, interest rates rising and local government land revenues facing uncertainty due to an unsustainable property boom, the number of LGFV credit rating downgrades has risen recently. Moreover, the continued practice of using land and property as collateral is questionable. These factors will likely exacerbate LGFV debt conditions in 2014.”