A new IMF paper argues that the short-term negative feedback of fiscal consolidation on economic growth is particularly strong at present, because of lending constraints, limits to monetary easing, and the global scope of restriction. As a result, fiscal tightening in today’s developed countries may, by itself, initially raise debt ratios over and above their trajectory without fiscal action. While the effect may not be lasting, it can lead to dangerous dynamics if financial markets fixate on debt dynamics and governments engage in multiple rounds of tightening.

“The debt ratio does not decrease one-for-one with fiscal tightening. The reason is that fiscal tightening reduces GDP in the near-term—an effect referred to as the fiscal multiplier. Lower GDP in turn reduces the denominator of the debt ratio and also partly offsets the consolidation effort, thus affecting the numerator (automatic stabilizers). This may mitigate or even eliminate the direct tightening effect, at least in the short run.”

“While the literature suggests an average first year fiscal multiplier of around 0.6 for advanced economies, there are reasons to believe that in the current environment, it could be closer to 1….In recessions, the proportion of credit-constrained households and firms, which adjust spending in response to a change in disposable income, is higher. For G7 economies, Baum and others (2012) find that first year spending and revenue multipliers in downturns are, on average, estimated at 1.3 and 0.4, respectively…In many countries there is limited room for monetary policy to become more accommodative. Policy rates have been near the zero lower bound since the onset of the Great Recession and, as shown by simulations in IMF (2010), under such conditions the multiplier would be close to 1…Post-crisis deleveraging by the financial sector and households, both of whom are seeking to rebuild their balance sheets, can further impair the transmission of easier monetary policy…In addition, at present, a country cannot rely as much as before on external demand to help cushion the impact of fiscal consolidation on growth because many of the advanced economies are growing slowly or not at all.”

“With multipliers close to 1, fiscal consolidation is likely to raise the debt ratio in the short run in many countries [according to the paper’s simulation]. Although the debt ratio eventually declines, its slow response to fiscal adjustment could raise concerns if financial markets react to its short-term behavior. It may also lead country authorities to engage in repeated rounds of tightening in an effort to get the debt ratio to converge to the official target. Not explicitly taking into account multipliers or underestimating their value may lead policymakers to set unachievable debt targets and miscalculate the amount of adjustment necessary to bring the debt ratio down.” 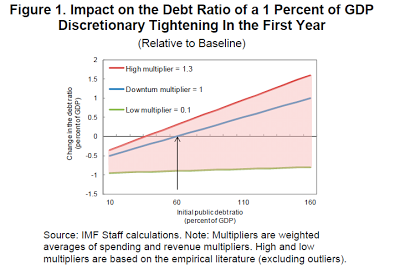 “If fiscal policy is tightened in the first year only, the debt ratio would generally decline from the second year…The tightening is permanent (not reversed in the following years), but it is assumed that its effect on output is temporary and fades away within 5 years, a standard assumption in the literature…[These] results rely on two key assumptions; that fiscal tightening only takes place in the first year, and that the negative effect of fiscal tightening on GDP fades away within 5 years. These two assumptions are questionable, particularly in the current environment. Most countries are engaged in repeated rounds of fiscal tightening…A combination of high and persistent multipliers, repeated tightening, and high debt would make debt reduction more challenging.” 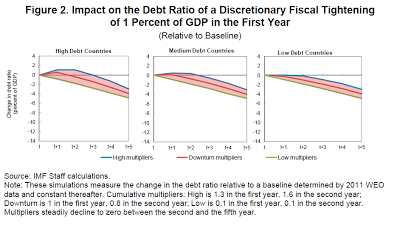 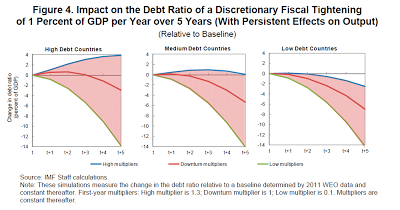