JP Morgan’s Nikolaos Panigirtzoglou presented a nice reasoning, why the December 12 2012 U.S. Fed decision to replace its maturity extension program with outright bond purchases of the same size will put in place an important additional influence on long-term treasury yields. This influence is an intensified “liquidity affect” over and above the previous “demand effect” on government bonds.

Flows & Liquidity QE’s stock effect
JP Morgan Global Asset Allocation Research, 14 December 2012
Background: operation twist denotes the U.S. Federal Reserve’s program of buying longer-term Treasuries and simultaneous selling some of the shorter-dated issues, with the objective of reducing long-term interest rates. A first version of “operation twist” had been used as early as 1961. The modern operation twist had been instituted in two parts. The first ran from September 2011 through June of 2012, and involved the redeployment of USD400 bn in Fed assets. The second part was executed between July 2012 and December 2012, swapping paper worth USD267 bn.
Panigirtzoglou points out that “the Fed announced [on December 12, 2012] an extension [and modification] its original operation twist, bringing the total amount of net bond purchases expected for 2013 close to USD1000 bn. [Unlike under operation twist the new operations imply that] excess reserves are likely to increase by the same amount, from USD1.4trn to USD2.4trn, adding 70% extra liquidity into the banking system. This extra liquidity has the potential to suppress bond yields in addition to the traditional demand effect of QE.
The demand effect is well documented and understood. As the Fed buys Treasuries and Agencies debt, it offsets government supply, exerting downward pressure on yields. From the Lehman crisis, the Fed purchased Treasuries and Agencies at a pace of USD500bn per year. This flow, which is equivalent to around 3.5% of U.S. GDP, has offset more than a third of the government deficit since the end of 2008. In other words, QE purchases meant that the QE-adjusted government deficit has averaged 5.8% of GDP since the end of 2008 instead of 9.3% for the actual government deficit.
What is often overlooked and surely less well understood is the liquidity effect. QE by itself does not affect the overall supply of collateral, as government bonds are replaced with reserves. But it does affect the relative pricing of collateral by creating a shortage or expensiveness of government bonds relative to cash or [central bank] reserves. This liquidity effect is also set to intensify next year. The stock of government and government related bonds held outside the Fed will likely decline by USD375bn (USD1000 bn of QE purchases minus USD675bn of net issuance for Treasuries and Agencies). As a result, the liquidity effect ratio, i.e. the ratio of excess reserves divided by the stock of government securities held outside the Fed, is set to rise from 10% currently to 17% by the end of 2013. 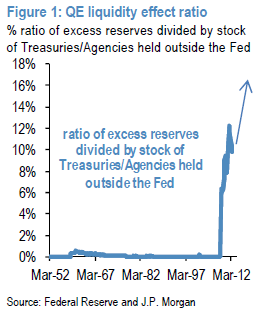 The most important difference between the liquidity effect and the demand effect is that that the former operates via stocks while the second operates via flows. As the Fed buys Treasuries and Agencies both effects are in operation. The Fed offsets government supply via bond purchases and at the same time the stock of zero-yielding excess reserves rises relative to the stock of government and government related bonds held outside the Fed.[Hence] if the Fed were to stop purchasing bonds on net, the demand effect would disappear but the liquidity effect would remain. For as long as the Fed maintains its stock of QE and its zero-interest-rate policy, the stock of zero-yielding excess reserves will continue to affect the relative pricing of government bonds.”